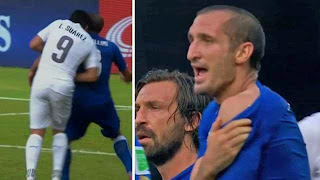 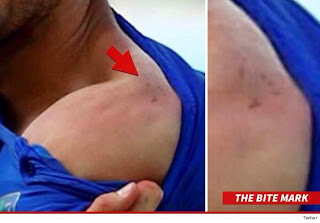 Fifa has opened disciplinary proceedings against Luis Suarez after the Uruguayan was accused of biting by Italy centre-back Giorgio Chiellini.

The Liverpool striker, who has previously been embroiled in two biting controversies, seemingly leant into Chiellini and bit his shoulder, with the Juventus man keen to point a mark on his skin out to the referee.

And after announcing on Tuesday evening that they would look replays of the altercation, the world's governing body has deemed the incident serious enough to take forward.

A statement read: "Fifa can confirm that disciplinary proceedings have been opened against the player Luis Suarez of Uruguay following an apparent breach of art. 48 and/or art. 57 of the Fifa Disciplinary Code during the 2014 Fifa World Cup Brazil match Italy-Uruguay played on 24 June 2014.

"The player and/or the Uruguayan FA are invited to provide with their position and any documentary evidence they deem relevant until 25 June 2014, 5pm, Brasilia time.

"According to art. 77 lit. a of the Fifa Disciplinary Code (FDC), the Fifa Disciplinary Committee is responsible for sanctioning serious infringements which have escaped the match officials' attention. Furthermore, according to art. 96 of the FDC, any type of proof may be produced (par. 1), in particular are admissible, reports from referees, declarations from the parties and witnesses, material evidence, audio or video recordings (par. 3)."

If found guilty, Suarez will almost certainly miss the rest of the World Cup, and could receive a ban of up to 24 matches or two years, which could affect his club career as well as international football.