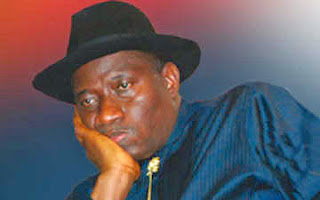 President Goodluck Jonathan on Friday admitted that he no longer sleep with his two eyes closed since the April 14 abduction of the schoolgirls from Government Girls Secondary School, Chibok, Borno State, adding that the situation will remain so until the girls regain their freedom.

He expressed the belief that the over 200 schoolgirls were still being kept within the country by the Boko Haram sect.

The President The President also ruled out the possibility that the girls could have been moved out of the country by their abductor, saying they may still be holed up inside Sambisa Forest.

Jonathan spoke while addressing a world press conference at the end of the three-day World Economic Forum for Africa held in Abuja.

He also denied media reports that the nation's security agencies were slow  in responding to the abduction.

The President also told the world that most of those who were responsible for the recent bomb explosion in Nyanya, a satellite town of Abuja, have been arrested.

He said the visitors would have seen for themselves that although the country was facing challenges, Nigeria was moving on.

He said with the commitments and concerns raised by the international community, the abductors of the girl had no choice than to free them because they no longer have a hiding place.

He said, "Let me also use this unique opportunity to thank all of you who have shown commitment and concern those of you in Nigeria and those of you outside this country to continue to press on that these terrorists must bring back our girls.

"And they have no choice because I am quite pleased that the whole world is signing the same message that they must bring back our girls.

"And there is no where they will take this girls to, they have no hiding place, we must work with the global community that is quite keen to make sure that we bring back this girls.

"I thank you for all the concern, for all the sentiments, communications you are putting across to the rest of the world about what we are doing and of course where the world wants to support us."

Jonathan disclosed that he is regularly in touch with heads of governments across the globe on the need for them to assist Nigeria in rescuing the girls.

He said security personnel of a number of the countries were already in Nigeria.

"I'm in touch with a number of Presidents. Of course,you are aware of my conversation with the American President and the United States government, French Government, the Chinese Government and other countries, willing to assist us.

"I have been talking to all the Presidents around Nigeria-Cameroon, Chad, Niger, Benin and I am going beyond that also because the crisis we have in Nigeria cuts across Africa. It goes up to Central Africa, it goes up to North Africa.

"So I'm discussing with the leaders within the region and of course the world leaders that will support us.

"A number of the countries already their personnel have arrived Nigeria to assist us to find the girls. Collectively we must find these girls," he said.

When asked about the current location of the girls and their abductors, Jonathan said they were still in Sambisa Forest in Borno State.

He said there was no way the abductors could have moved such a number of girls to Cameroon without people seeing them.

He said,  "The attackers are in a part of Borno State described as Sambisa Forest. It is a forest area and we are working with the experts that will use remote sensor to see that wherever they are, we will see.

The President described the report that there was a slow response on the part of security agencies and the government to the abduction as a misconception.

He said, "There is no slow response at all, no no. It is a misconception. The response is not slow. I have explained this. Borno State can be described as the headquarters of the terrorists, Boko Haram, they are more in Borno State, then followed by Yobe and then Adamawa.

The only thing we did not do because we felt it was not necessary then was to video the aircraft moving, the military people moving and the fighter helicopters."