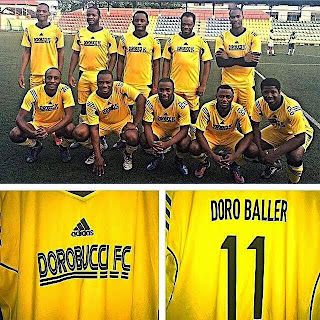 There are rumours that Don Jazzy has started his own football club to promote his brand and the hot single Doro Bucci.

There are even photos emerging online of a football team named 'Doro Bucci' and the players having the word 'Doro' before their names on the back of their jersey. This pictures where shared by Don Jazzy.

However other reports claim the football team was created by a group of ardent Don Jazzy fans, who decided to name their club after the Don Jazzy produced hit 'Doro Bucci.' Check out the doro bucci team photos .