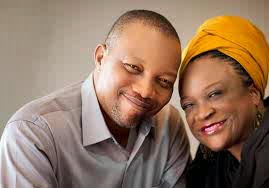 The writer, Film maker and television drama producer, Mrs. Amaka Igwe passed away on Monday night in Enugu and her husband, Mr. Charles Igwe has revealed that the ongoing Doctor’s strike led to the death of his beloved wife.

Narrating how Amaka died, he said:

“we were in Enugu preparing for her new soap, and Amaka was taking some of the people through acting when she had an asthma attack. After using inhaler without success, she was taken to a nearby hospital, but we were told that the doctor was not around.

We then went to the teaching hospital in Enugu, where we were again told that the Doctors were on strike. It was while we were taking her to another hospital that she died.”

May her gentle soul continue to rest in peace…