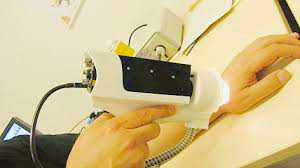 London: At a time when the frequency of both non-melanoma and melanoma skin cancers has been increasing causing serious concerns throughout the world, scientists in Finland have invented a new camera that could change the way of treating the deadly disease in the coming days.

The new innovative hand-held camera developed by the Finnish researchers at the VTT Technical Research Centre, is able to detect early stages of skin cancer in just two seconds.

Researchers have run a pilot study using the hyperspectral camera, and the preliminary results of the study are promising.

The camera can be used to detect the skin cancer and its precursors for early treatment of the affected areas.

The hyperspectral camera can also be used to detect borders of poorly delineated skin tumours such as lentigo malignas in order to avoid the need for re-excisions.

It captures images in up to 70 narrow wavelengths, whereas a regular camera uses only three.

Skin cancer rates have been growing exponentially due to population, ageing and UV damage caused by excessive exposure to sunlight, said VTT in a press release.