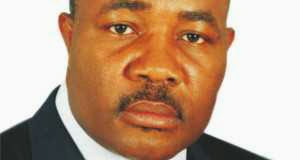 An editor with an Uyo-based newspaper, Global Concord, Thomas Thomas, abducted on Tuesday by unknown armed government security operatives, was on Thursday arraigned before an Uyo Magistrate Court.

PREMIUM TIMES learnt the journalist was discreetly arraigned, without the knowledge of his employers, family and lawyers.

After the secret arraignment, a copy of the charges was published on the Facebook page of the Akwa Ibom State Government, which wants the journalist jailed for 14 years because his paper published a story critical of Governor Godswill Akpabio.

Mr. Thomas, whose newspaper is known for its critical views on the Akwa Ibom State government, is facing a three-count charge of using his medium to commit acts purportedly contravening the Akwa Ibom State Internal Security and Enforcement Law 2009.

The charges were contained in a one-page Charge sheet No. 1/U/389C 2014 signed by the State Director of Public Prosecution, Usen Usen. The case is between Mr. Thomas as
the accused and the State (Akwa Ibom) as Complainant.

"That you, Thomas Thomas (M), by series of
publications in the Global Concord Newspaper between August 2013 – June, 2014 did make yourself an object of dread and
nuisance, and thereby committed an offence contrary to Section 6(1)(e) and (f) and punishable under Section 6(2) of the Akwa Ibom State Internal Security and Enforcement Law 2009."

"That you, Thomas Thomas (M), by series of publications in the Global Concord Newspapers between August, 2013 – June, 2014 organized a system of intimidation and thereby committed an offence contrary to Section 6(1)(d) and punishable under Section 6(2) of the Akwa Ibom State Internal Security and Enforcement Law 2009."

"That you, Thomas Thomas (M), did cause extreme fear to the persons of Edidem Umoette and Edidem Ime Udousoro Inyang,
Paramount Rulers of Etinan and Ibiono Ibom Local Government areas respectively by presenting to them a purported recorded message of intention by His Excellency,

Godswill Obot Akpabio, the Governor of Akwa Ibom State to murder them and thereby committed an offence contrary to Section 6(1)(a) and punishable under Section 6(2) of the Akwa Ibom State Internal Security and Enforcement Law 2009."

The Chairman of the paper's Editorial
Board, Unyime Equere, told PREMIUM TIMES that the management of Global Concord was surprised at the secret arraignment of Mr. Thomas, as they were neither served any notice nor allowed any legal representation. for their staff.

According to Mr. Equere, since Mr. Thomas was abducted on Tuesday by three armed men at about 6 p.m. at the popular Aka Road/NEPA Line junction in the state capital, nobody knew where his captors took him to.

Both the state Police Public Relations Officer, D!ckson Etim, and the Akwa Ibom State director of the State Security Service,
SSS, Tomas Minti, had denied knowledge of the editor's whereabouts.

Mr. Equere said both the management of the newspaper and Mr. Thomas' siblings were so worried for his life and safety that they had concluded plans to approach the court in Uyo on Friday to file an application seeking to compel both the security agencies and the Akwa Ibom State government to produce him. The State Commissioner for Information and Communication, Aniekan Umanah, said Global Concord Management was properly served the charges before Mr. Thomas was arraigned in court on Thursday.

Although Mr. Umanah denied allegations by Global Concord management that they were not served, blaming the situation on the media house, which he said does not have any known official address.