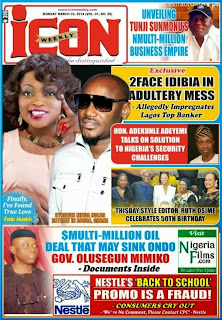 2face Idibia has slammed a N100million suit against soft-sell magazine, Icon Weekly, for libel. The Media/Entertainment Law Firm of L & A- Legal Consultants has filed libel proceedings on behalf of  2face, at the Ikeja High Court asking the court to award their client the sum of N100million being damages for the libelous publication posted on the magazine's online and print platforms.

In March this year, Icon alleged that 2face committed adultery by impregnating a 'Lagos top banker' who is supposedly his account officer in one of the new generation banks and that infact, the lady had every intention of keeping the baby. The story went viral, which 2face later denied.

A source close to the music icon said the story, which was found to be false, made 2face lose a very lucrative deal and caused ripples between him and his wife. Icon weekly is said to have approached 2face's team for discussions on a possible out of court settlement.